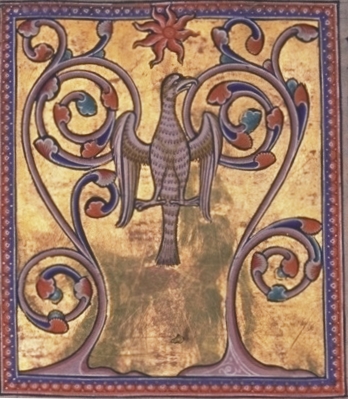 The Sun is in its last degrees of Scorpio, preparing to enter Sagittarius. At the Anaretic (29th) degree, the Sun’s focus manifests powerfully and intensely, much like the pressure of energy building-up just before it breaks through into a new sign.

We’re currently revisiting the lessons of Scorpio – a focus on intimacy, sexuality, deep emotions, ancestral karma, subconscious beliefs, fears and the Shadow. Scorpio is the Pit or Cauldron in which the Phoenix goes to die, only to Re-emerge. Here we are being asked to release older parts of the Self, to arrive at a greater sense of Self-Knowing, Self-Mastery and Emotional Security.

The Sun is sextiled the True North Node (29 Virgo) – The deeper we get with ourselves, the more likely we are going to discover paths of service, healing and nurture at this time. Those of you with placements near 29 Aries are going to be experiencing a MAJOR Yod, or Finger of Fate. Certainly the opportunity for rebirthing a (aspect or layer) new self, a key or pivotal moment or breakthrough.

The Sun is also in a Grand Water trine with Vesta, the Goddess Asteroid of Priestessing (28 Pisces) and Varuna, the (according to some sources, pre-Vedic, Dravidian deity of the lakes, waters, and Nagas – 29 Cancer). Vesta asks us to release ourselves from older wounds, experiences of spiritual vulnerabilities, karmic connections and anything that no longer resonates with our Spirit. As we release or surrender these experiences, we allow for a new identities and pathways of service and healing to emerge.

Varuna’s role is harder to explain – my journey with him has brought me back to a more primordial, formless, understanding of the Sacred Masculine – reflected in the way he continues to be worshipped in Nepal and the vibration I get from him in South India. The Vedas, which came later, see his role differently – that’s a long discussion in itself. In Cancer, I interpret Varuna’s energy to refer to a process of emotional cleansing, paving the way for renewal. To me, he represents the blank slate of Creation, well before Humanity began to invent/recognize its Gods and Goddesses and to attribute qualities, forms and structured relationships to/with them.

Taking that all together, it seems to be a time for the heightened expression of emotions and the element of ‘Water’ (intuition, emotion, the ‘flow’ of energy, ying energy, sense of connectedness, etc.). As we tread these emotional waters, we see opportunities for greater healing, catharsis and nurture – in preparation of the New Paths that Sagittarius will be encouraging us to explore.

It’ll be a rough ride for some you, so give yourselves the space you need to. Bear in mind that others will be responding to this energy in their own ways.

We’ll be seeing some easing of this intensity when the Sun shifts into Sagittarius at 15:25 UTC time, 22nd November 2015.